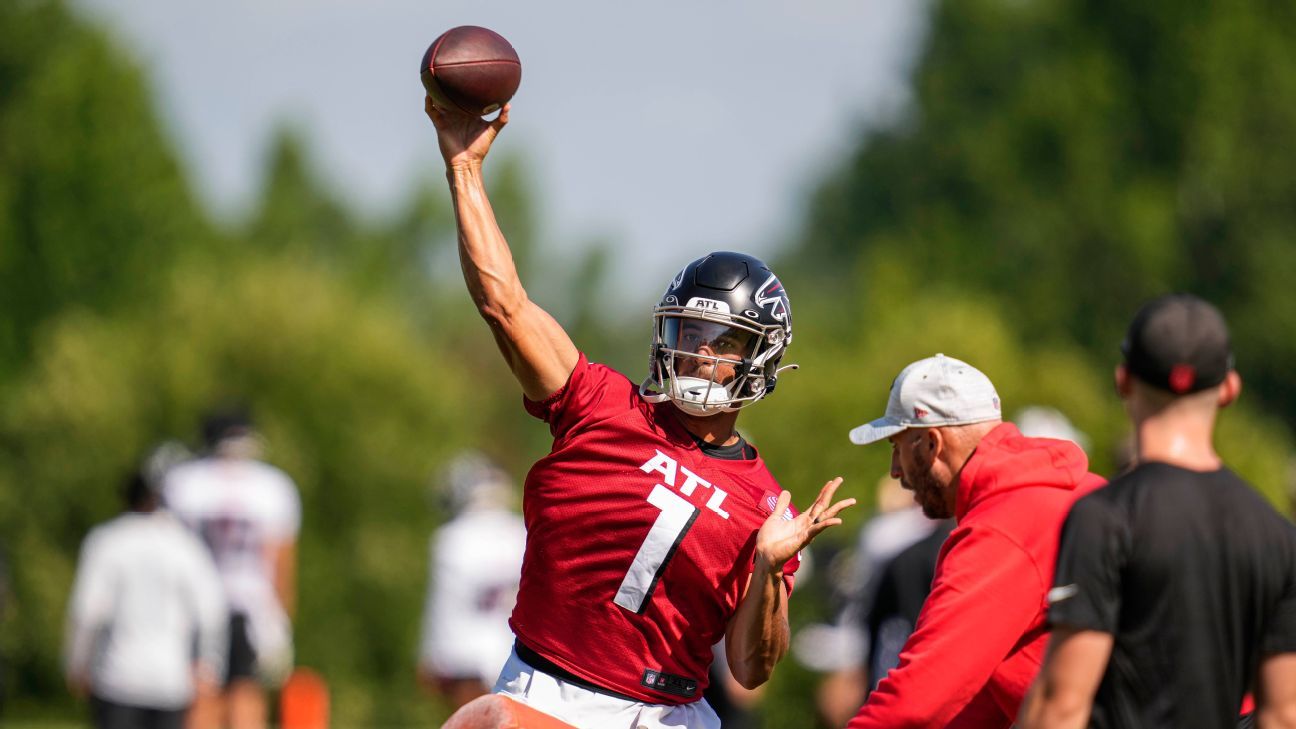 
FLOWERY BRANCH, Ga. – It was late in Saturday’s practice, and Atlanta Falcons quarterback Marcus Mariota appeared to have nowhere to throw. The coverage was good, but this was a red zone play, so he took off for the end zone.

And when he scored, Mariota celebrated by launching the football more than halfway up the hill where fans sit and watch practice. It was at once a moment of exhilaration in the midst of one of the most competitive practices of coach Arthur Smith’s tenure and perhaps a release for the quarterback himself.

It has been a few years since Mariota, the No. 2 pick in the 2015 draft, has been in this position – going into a season as a team’s presumptive starting quarterback. It was part of the allure of coming to Atlanta, along with reuniting with Smith, his former offensive coordinator. After two years with the Las Vegas Raiders as the backup to Derek Carr, this was a chance to be the lead guy again.

When Mariota signed in March after Atlanta traded franchise icon Matt Ryan to the Indianapolis Colts, he knew he was coming into a tricky position, replacing the best quarterback in team history. But he’d been through so much – injuries, losing his job, two years essentially watching – that this could be the best opportunity he had.

It would make sense if Mariota felt that way, and it has shown in camp.

He has been consistent and getting the vast majority of the reps with the first unit — at least with the offensive line, as the pass-catchers have been cycling through with both Mariota and rookie Desmond Ridder. Mariota feels comfortable with the offense and familiar with what he’s being asked to do – even if he has a bunch of new guys playing alongside him. He’s moving well and seems to have a rhythm.

Offensive coordinator Dave Ragone praised Mariota for not pressuring the ball into spots and finding the open receiver. It sounds simple, but often quarterbacks don’t do that. Mariota didn’t throw an incompletion in a team period – at least during the parts open for for observation – until the third day of practice.

“Certainly his experiences brought him to this place,” Smith said. “And he’s in a good rhythm. He’s in a good flow out there.”

By all appearances, Mariota has been working as if he will be the starter at the beginning of the season, although Smith probably will approach quarterback as he does every other position: The best guy plays. But when it comes to third-rounder Ridder, it’s important to keep in mind that in the past six years, the only non-first-round rookie quarterbacks to start Week 1 were Deshone Kizer for the Cleveland Browns in 2017 and Dak Prescott for the Dallas Cowboys in 2016.

Quarterbacks coach Charles London told Mariota and Ridder they needed to come back from their six-week summer break ready to go. It was evident they complied by how they played without pads the first week.

Mariota has been assisted by good receiver play as there have been some less-than-pinpoint throws, and he has thrown a lot of short passes – but that’s part of taking what’s available. A key for Mariota will be his accuracy. As a starter for the Tennessee Titans from 2015 to 2019, he had a 62.9 completion percentage, 25th in the NFL for that span.

He started 61 of 80 potential games with the Titans, although in seasons when he was the clear-cut starter, he missed only eight games. Only twice did Mariota miss back-to-back games – both in his rookie year.

Mariota also rushed for 1,399 yards and 11 touchdowns in his five season as a Titan, even though he was benched for Ryan Tannehill in 2019. But the quarterback and his new head coach have grown since their Titans days, and the reunion offers Mariota a chance to rediscover what worked for him early in his career with the benefit of more experience.

In Tennessee, he learned he constantly needed to prove himself. Then, in Vegas for the past couple of seasons, his preparation remained the same. Just Sundays were different. Instead of being under center, he relayed what he saw to Carr, trying to help the Raiders win games from the sidelines instead of with his arm and legs.

But he was always building toward another shot. Atlanta called and gave him the opportunity. And now he’s once again leading an NFL team — as long as he plays well enough to hold onto it.